Initially, the idea of having a career in which traffic collided with broadcasting never came to her mind. In fact, radio came as a career choice, on a lark.  Ginger recorded a party invitation and handed it out to co-workers at the radio station in which she was an intern.  Several people suggested she consider giving it a go in radio, based on that recorded invite.  That's when radio caught her ear!
After graduating from USC with a degree in broadcast journalism and political science, Ginger started working as a dj in the Bakersfield and San Diego radio markets.  Chan went on to work as a TV news reporter in both Alabama and Orange County, chasing down tornadoes and the bad guys. After dabbling in Hollywood...working on game shows and for a movie producer, radio kept calling her name.  Eventually, the opportunity came to fly and report and it was one that she just couldn't pass up!  She joined the AM 570 Radio team in April of 2004.
Ginger believes in giving back to the community as she recently completed three years of service mentoring and working with high schools students at her church.  Last year, she was part of a team that built a house in one weekend for a needy family in Ensenada, Mexico.  Although, she is not able to master her native tongue of Chinese, Ginger says she knows how to order her favorite dishes and knows when mom is talking smack about her.

It seems that living by the beach is the perfect place fo this So.Cal native, as she loves to skate, run and exercise next to the ocean. Other favorites include watching a good running game on the gridiron, traveling, loud music, watching movies and good grubbin'!
Ginger believes that there's too much to do in life, and you can't do it if you're stuck in traffic. 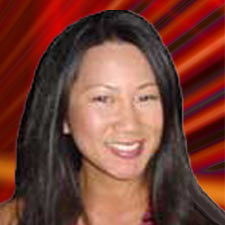