Joe Grande
Joe Grande was born and raised in San Jose, California where he attended San Jose State University and majored in Radio, Television and Film.

Joe has always loved being the guy on the microphone or the person who is entertaining everyone for a quick laugh. In High School Joe was A.S.B President and loved making the daily announcements along with announcing the home basketball games. In high school Joe enjoyed playing football, basketball, baseball, rugby and wrestling. When you ask him about those sports he acts like "Al Bundy!" Currently, he golfs and plays in a few basketball leagues, but golfing is his passionate sport.

His radio career started in San Jose during his senior year at San Jose State. He began working in Promotions as an intern; putting up banners, decorating events and passing out stickers. That's where he became known as Big Joe. After 9 months he began working on the Morning Show called the "Dog House". Soon after the Dog House was picked up by a San Francisco Radio Station, Wild 94.9. In the year 2000 he moved to Los Angeles to work for Big Boy's Neighborhood. His name was then changed from Big Joe to Joe Grande! Doing daily sports reports and pulling pranks off was some of the few things he did with Big Boy in the Mornings.
In 2003, Joe Grande began working for AM 570 as a co-host for the Oakland Raiders pre-game show. After Football season, he began hosting a Basketball Show "Balling with Vic and Joe."

Joe's a quick wit, hip, and extremely energetic personality that loves to give his insight on every issue. When asked about the listeners he says, "I really enjoy to interact with the listeners because they give me so much love, I feel like we're all family."  Joe Grande has been a great addition to the AM 570 family.

Matt “Money” SmithIn 1994, after completing his junior year at Pepperdine University, Matt Smith decided it was time to start thinking about his career. As a Pre-law Student (Double Major: Political Science and Speech Communications) he did the logical thing; took a job answering phones on a morning show at a Modern Rock Station.

Waking up at caused Matt to lose a year of his college social life, but those 18 months proved to be invaluable.  He turned KROQ PD Kevin Weatherly on to some great new music, including a little band called Sublime.  He not only worked with Kevin and Bean, but his love of sports brought him close to then “Sports Guy” Jimmy Kimmel. He was given the nickname “Money” and soon found himself on the air doing an assortment of comedy bits.

After graduation, realizing he needed to support himself (and pay back 38K in student loans) Matt left KROQ for a job at Polygram Records. He quickly moved through the ranks, and after 2 years, left Polygram as one of the first hires at newly created DreamWorks Records. One of the great things about both jobs was Matt’s insistence Lakers season tickets be included before signing a contract.

In 1998 while drinking a Bud Light in Kimmel’s backyard, Jimmy, Kevin Weatherly and Kevin and Bean’s Kevin were discussing what they should do about sports with Jimmy having left to start “The Man Show”. They decided even though Matt had a full time Job, he was the only person that had a shot to successfully follow Kimmel.

For the next 5 years, Smith worked 2 jobs, KROQ from 6 A.M. until 8:15, and DreamWorks from 9 until sometimes as late as . To say he has a  good work ethic is an understatement.

With Universal purchasing DreamWorks in early 2004, Matt was courted by Weatherly to work full time at KROQ. He acquiesced, became a much bigger part of the morning show, and also served as KROQ’s Music Director.

The constants through Matt’s life have always been his family, his sense of humor, and of course, sports. His playing career ended in High School, but he woke every morning to sports radio,  read the Sports pages front to back, and survived for years on Top Ramen and PBR to spend what little extra money he had going to games.

After 7 years of 13 hour workdays, Smith finally realized his dream. For the 2005-2006 season, he will be part of the AM 570 Lakers broadcast team. Tackling Pre-Game and Half-time Host duties.

It’s a long way from Constitutional Law, but Matt will tell you it’s where he always knew he would end up.

Wayne Cook
Born in Encino and raised in Newbury Park, I graduated from Newbury Park High School, and UCLA.  I married my wife Susan in 1997 and currently have a son and we're also expecting in March. C high school Social Science Chaparral High School during the day and talks sports at night.
The past few years Wayne has been working for AM 570 covering the UCLA Bruins football program as the host of the pre-game show and the side line reporter.
Wayne finished off his career at UCLA in 1994 but, he made his mark in the UCLA record books:
-Led UCLA to the Rose Bowl as a junior in 1993
-Ranked third in school history with 34 touchdown passes
-Ranked fourth in school history with 4,723 passing yards
-Ranked fourth in school history with 380 passing yards against ASU in 1994
-Set Pac-10 record with career interception percetage of 1.80% and single season percentage of 1.18%.
-Only player to pass for four touchdowns in a game more than once. (Three times)
-Only the third player in school history to pass for over 2,000 yards twice in career.
-Only quarterback to defeat USC in consecutive seasons since two-platoon football began.
Wayne is also proud of his many awards:
-Charles Pike Memorial Award for outstanding scout team player on offense in 1990
-George W. Dickerson Award for outstanding offensive player against USC in 1993
-N.N. Sugarman Memorial Award for best leadership on offense in 1993
-Kenneth S. Washington Award for outstanding senior offensive player
Wayne's NFL resume:
Signed with the San Francisco 49ers in 1995
Signed with the Arizona Cardinals after being released by the 49ers.
Dresses out twice with the Cardinals before being released.
After being injured, Wayne gave up on football despite opportunities to continue to play in the Arena Football League and the Canadian Football League. 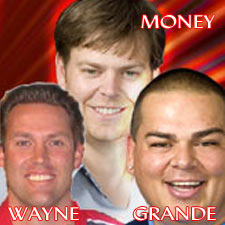